I’m happy to report that I’ve officially paid off the CopyCatCrafts.com website that I purchased for $4,000 in the middle of last year after just 7 months and now all future income is just gravy. In this post I’ll show you detailed income results from this website along with what I’ve learned from running it so with that said let me jump right into the income results for this site:

(See past blog posts on this case study: Start Here, Then Part 1, Part 2 and Part 3) 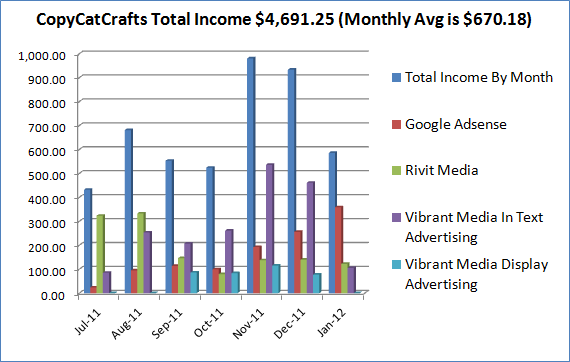 When I first bought CopyCatCrafts.com for $4,000 it was only generating roughly $100 – $200 a month in profit (which at first glance looks like I overpaid), but after making improvements that I’ve documented in earlier blog posts mentioned above, the income average for the past 7 months has settled at around $670.18 with a peak number of $980.76 in November. As of January 1st, 2012 the website had generated $4,105.06 in total profit which was enough to cover my initial investment of $4,000 (sweet!). Now that January has come to a close I can see that even during historically one of the lightest months for advertising income (January) the site still managed to make me $586.19 which is all the better considering my initial investment is already paid off.

Rivit Media is a banner network specifically for sites focused on DIY, unfortunately the best months were July and August whereas November and December they didn’t seem to have any premium banner campaigns. So the income could have been much higher, but when Rivit Media doesn’t have any of their own banner ads they use Adsense instead. I may look for a new banner network especially after the traffic grows even greater for this website.

Every single month Adsense income has grown which is great news especially since I expected it to drop off after November and December. I could still be more aggressive and put in a 336 x 280 Adsense unit right beneath the title of an article, but there is a fine line between making money and using too much advertising that can hurt the user experience. This website is less focused on Google organic search traffic and more reliant on users sharing the website so I try not to be too aggressive. One ad unit I’ve considered removing is the top 728 x 90 block which is never clicked and to end the article with an Adsense unit inside the content. I will do more testing with Adsense moving forward.

The in text advertising income from Vibrant Media has generated roughly double what Google Adsense has provided with only January seeing a drop in advertising income from Vibrant Media where the advertisers have less budget to spend. By looking at the graph above it should be obvious how important it is to use multiple monetization methods because at various times of the year some methods will work better than others.

This isn’t currently active on the site right now, but it’s basically a little bar that you see at the bottom of the page. When the year gets further underway and Vibrant Media has signed more advertisers to use this advertising method I’ll resign a contract with a preset eCPM rate for using the bar on the site.

Update: So it turns out writing a blog post at 2:00 AM in the morning I forget things like expenses hah hah.

Expenses for the site are only $100 a month to pay a writer $25 an hour – she does a great job and because of the nature of the content on the site it only takes her roughly 4 hours to do all of the content for the month.

So when I take the income less expenses it’s more like paying the site off in 7 months, but in either case as of Feb 1st all future income is gravy. Because I pay someone to write the content it should be worth mentioning that I’ve spent more of my time writing these case study blog posts on this blog than I have spent working on the website.

Now I have a roughly $600 income stream coming in and still more opportunities to grow the website.

There is still more money to be made specifically with the email list and I could also test out more banner advertising platforms, sizes, locations etc. to improve the income even further. I’m also working on another side project for this website that will increase the income even more. As always I’ll share my income results in future blog posts to let you know the results of my testing.

I believe there are a lot of opportunities to make money in this space because regardless of what Google algorithm changes may come about in the future whether it’s Panda, Koala, or the infamous Sloth Bear update as long as there is an internet there will be websites making money (obviously the later two Google algorithm updates I made up). As I’ve said before, one of the main things I look for when I buy a website is how much work it will take for me to run it. Ideally I try to find websites that require minimal upkeep or that can be outsourced to run with minimal involvement from myself. If every time I bought a website I had to write all of the content for it I’d never be able to fully scale this business model and neither would you. So look for opportunities where you can leverage your existing capital to buy a website where you don’t have to take care of all of the content creation yourself and/or find websites that don’t require constant updates.

I spent 5 months working with a team of developers and thousands of dollars to create a software based solution to the problem of finding websites worth buying. This tool does a great job at automating part of the research process and I think it has a lot of value for you that I strongly suggest you pick up.

Be sure to check out Site Finder Pro here

Update: Since publishing this blog post in February 2012 I’ve written a new case study update. Along with that update I strongly suggest you go back and read the first case study updates if you missed those. All of the related articles are available below:

Introduction – How To Buy A Website
Part 1 – Two strategies to employ after you acquire a website
Part 2 – How I drastically increased the income
Part 3 – Long term income case study results
Part 4 – $4,000 Investment Paid Off (You are reading this right now)
Part 5 – How To Buy Websites And Profit In Less Than 12 Months

As always, if you have questions ask below thanks!