This is the 1 year late case study. It’s embarrassing to admit, but with all of the projects I had going on in 2013 I held off on posting this case study for a very important reason. Read on to find out what it is. For now here’s the article as I had written it in 2013:

In early May I set out to answer the question “Can you really make money with paid surveys?” and today I’m sharing my results.

So, can you really make money filling out surveys?

Yes – but let me elaborate.

Filling out surveys isn’t a day job income replacement, instead it falls in the line of a supplemental income method.

The less you make per hour in your day job the more valuable this method will be for you.

The other benefit of filling out surveys is that it’s a much more guaranteed method for earning money online as opposed to the other strategies I’ve shared on this website that rely on more skills, research, time, effort, luck etc to be successful.

Bottom line it is drop dead simple to get your very first check of online income from filling out online surveys: 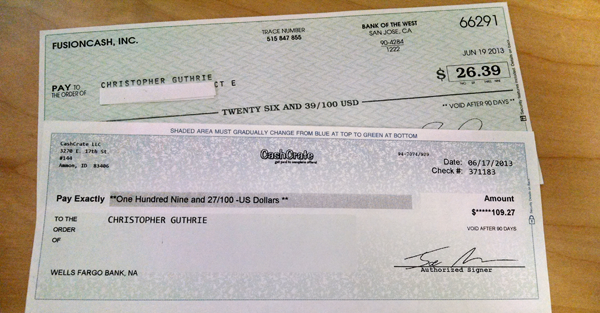 These were just the paper checks.

Getting your first check of real online earnings may just serve to inspire you to move on for more.

I know the very first Adsense deposit I received for $176.16 way back in November 2005 felt amazing. It’s the light switch that told me there was something to this online business thing and what pushed me forward failure after failure onto much bigger payments.

The payout potential is entirely dependent on the company you’re using to fill out surveys, selecting the highest payout surveys from the available opportunities and going through the surveys as quickly as possible while still providing quality results.

I said I was going to spend an entire month testing this method of earning money online, but I only really spent just under 3 weeks in my spare time.

My brother was in town from Australia for 10 days so I took those 10 days off from work to do nothing but hang out with him. With that said here are my results with 99% of my income coming from actually filling out surveys and completing offers – obviously if I included referral income it could sway the results:

May Income Total: $248.06
Keep in mind, I only took surveys in a little bit of my spare time after my regular work hours and for a less than 3 weeks.

Each survey company only has so many surveys available at any one time. So in order to make the most money possible you will want to sign up for more companies so that you will always have surveys available for filling out if you’d like. Some companies will offer the same survey though so don’t do that survey at each company or you’ll get credit revoked for each survey you filled out.

So How Do You Actually Make Money? 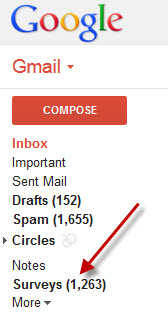 The above companies offer you methods for making money from filling out surveys and some companies provide offers you can complete (which I’ll describe next). But it really is as simple as signing up for the companies listed above, answering the preliminary screening questions they may ask you and then waiting to be emailed survey opportunities. In many cases surveys will be available for you as soon as you sign up for a company.

What About Making Money With Offers?

CashCrate and FusionCash are primarily offer companies that provide both free and paid offers that you can complete for compensation. For example, I signed up for a company called Manilla.com and got $2.40 from CashCrate when I linked my Netflix account and two other accounts in their service (took me less than 5 minutes). There are some paid offers that make it possible to make more money from the reward than the cost of signing up, but sometimes these are tied to monthly subscriptions so make sure you cancel in time – or just stick to the free offers (some offers will revoke your reward if you cancel too quickly)

How Long Do Surveys Take To Fill Out And What Do They Pay?

90% of the time I complete these in under advertised time.

Every survey varies in length and compensation, but from my experience so far the typical payout is anywhere from $.50 to $4.00 and between 5 minutes to 35 minutes.

I’ve seen ads for survey companies that advertise that you can make up to $50 (or whatever) per survey but I haven’t seen any of those yet. In either case, it’s generally very obvious which surveys are worth taking because the companies list out the reward as well as the estimated time for completion. This variation in payout and time for completion is precisely why I signed up for a lot of companies and why I’d suggest you do the same. That way you can quickly scan the highest paying offers and go for those ones first.

In my experience 90% of the surveys I filled out I completed in less than the advertised time.

This held true across every company I tried out so it wasn’t specific to one company. Roughly 5% took as long as indicated and another 5% took a bit longer than was advertised. Roughly 20% or less of the surveys I would be screened out of (where they ask a few questions and eventually determine you’re not in the target market). This screening process generally would take less than 60 seconds to be weeded out so you don’t end up wasting too much time.

How Can You Complete Surveys Faster?

One of my best strategies for signing up for survey companies and filling out surveys faster was by using RoboForm to automatically populate answers to common questions such as age, sex, address, race, income etc.

With RoboForm you can even program in custom questions and answers. So I programmed in every variation of the most common questions asked so that I could simply click the RoboForm button and automatically input my information.

RoboForm has a free trial that also allows you to store a smaller amount of passwords and a pro version that allows you to store and sync unlimited passwords between your phone, multiple computers etc. I’ve been paying for the software for 3 years now as it’s enables you to just remember one complex password and then use a highly complex password for every other password protected online service out there.

Overall – Would I Suggest This Strategy For Everyone?

As I said in the beginning, this method of earning money online should be considered supplemental only. The less you earn at your day job, the more valuable this strategy can be for you. Ultimately it does take work and you are trading time for money so it’s just like a side job. Granted, it’s a side job you can complete while watching TV and not paying a lot of attention which is a bonus.

So Why Did I Take So Long To Publish This Case Study?

In my search to discover if you could make money with these online survey companies I did a lot of research. Specifically, I wanted to find the best companies available but whenever I’d do a search for something like “opinion outpost review” I’d find a blog with a review that had very little detail. It was clear that the author was just trying to make money but as an interested survey taker I felt like there should be a more quality review source.

So last year I wanted to build an authority review website for all of these survey companies. I set aside the project because I was busy with so many other things but now I’ve finally got back to it.

Feel free to go check out my new site: SurveyChris.com (you may recognize the design as well, I’ll get to why I picked that later)

Note: Much more content (and particularly) reviews are coming soon.

I’m going to share my income results from building this review website as a case study right here on this blog. I want to show you how and why I make various decisions as I build an authority style website.

If you’re interested in trying out survey’s as a monetization method be sure to sign up for the Survey Chris newsletter. I’m working on a free great guide which will help you avoid some of the dumb stuff I did:

Have you ever tried taking online surveys? Share in the comments below.

Note: Obviously I’m not going to be pulling in a ton of money taking surveys, but there is a segment of internet users looking for easy no fail ways to make money and I can certainly also make money referring people to the winners. That’s who I’m going to serve with this website.