Earlier this month we hosted a live private event in Las Vegas, NV for our Amazon ecommerce coaching group – AzonMasters.

At the last event in July 2014 we did a private dinner, but we felt we could provide more value to our members by doing an in person full day event so that’s what we did this time.

This was the first event we’d ever done so I know we made a few mistakes but ultimately I think the event was a success. Here’s what I learned.

How to host a live event

[yellowbox]BONUS: Click here to access your free video training on how to create a 6 figure plus Amazon FBA business in your spare time.
This step by step guide is the exact formula I’ve used to create my Amazon business[/yellowbox] Note: If you’re looking for advice on how to sell tickets to an entirely brand new event that isn’t what this post is designed to cover, but instead I want to point out a few logistical lessons and failures on my end so that you keep them in mind in case you do an event in the future.

Step 1: Determine how many people will attend

We knew back in October that we would be doing a live event in February but what we didn’t know was how many people would be there. Based on our numbers for the dinner we did in July 2014 we had roughly half of the people that joined the group came out to meet in person.  We started conversations with hotels in Vegas based on those preliminary numbers of half the people that joined our group in October 2014 making it out to meet in person in February.

To lock in your numbers you should charge something for the ticket even if you give the money back at the door (which is what our intent was). Our live event is a free bonus for joining the group so it’s a unique situation where we give back the cost of the ticket and charge a relatively low $100 non refundable ticket fee (to get a more accurate count on our numbers).

If we had people “buy” free tickets the tendency would be to take a ticket even if they may not be able to make it to the event (I’d probably do the same thing). 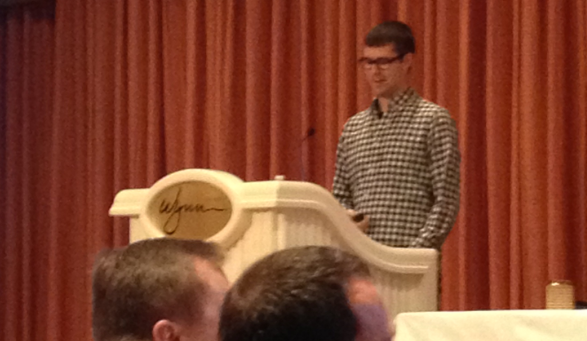 My jokes killed it

We did our event at the Wynn in Las Vegas the day before the main ASM event began, but we contacted all of the other major hotels and casinos near the Venetian (where the main ASM event was taking place). The Venetian said they were full and that they couldn’t confirm if there would be meeting space for us until only 30 days before our event date – which wasn’t really acceptable as I wanted people in our group to be able to plan ahead and know what we were doing so we had to look at other nearby venues.

The most surprising thing I noticed was just how wildly the pricing varies mainly because some venues required a food and beverage minimum. Most places we spoke with had a minimum of over $5,000 (even for a group our size of ~70 people).

We went with the Wynn in part because there wasn’t a massive food and beverage minimum (just a room rental fee) but we still paid for a camera operator and audio engineer for the full 9 – 5 session our live event ran for.

Step 3: Determine your room set up

There are a lot of questions you need to answer from the perspective of both the presenters and the audience such as:

We used a small stage and a podium with a table and four chairs for the Q&A panels. On either side of the stage we had projector screens with our slides (when applicable).

It’s a lot of work to walk through the details but fortunately the event planner I worked with was really good.

I mentioned this before, but we didn’t have to go out and market our event because it was a bonus for the people that joined the group.

To make it simple we used Brown Paper Tickets to sell our tickets. Very easy to set up, but they do require that you have your venue location set before you can sell tickets (makes sense).

How the event went:

The bulk of the speaking was split between Brian and I, but we also had two Q&A panels where two groups of four successful sellers came up to answer questions about their businesses (we didn’t have enough time or room to bring all the successful sellers up).

We went from 9 AM to 5 PM with a break in the middle for lunch.

I can’t share the specific  topics we covered but based on the feedback I received from our group overall the event was pretty well received. It’s nice to connect and meet people face to face in our group, discuss their businesses and see how we can help each other.

Here’s what we messed up:

This is my favorite part because I can highlight some of the things we failed on that at the time were easily overlooked.

A: Didn’t have the right video cable. When they said there would be an HDMI hookup at the podium I didn’t think to ask if it was a male or female hookup and we had the wrong cable. Had to pay $100 or something to rent a different cable.

B. Rented too many mics. We had 5 wireless mics and a podium mic. 4 wireless mics were for the panels that we did where we brought up successful sellers from our group, but in hindsight they could have just passed the mic down or we could have had 2 mics for the 4 panelists. We also had a 5th mic to use for audience questions but that never works, in a smaller setting because people just ask from their seat so don’t bother with an audience mic.

C. Recorded in an older video format. I’m not a very big video / audio guy so I should have been more clear in indicating that during the initial planning stages. The event was recorded using MiniDV as a format and then I had to borrow someone’s camera to transfer the footage to my computer to edit. Next time I’d rather just record in a digital only format and also have someone else edit.

D. Wasn’t clear about refreshments. I thought we’d just have water and coffee, but when I got to the room we also had water bottles and soda (the water bottles were not really necessary when we already had water carafes in the back with cups). Spent nearly $1000 on soda and water bottles. Not a big deal but worth mentioning if you’re on a tight budget because you will likely be charged on usage.

E. Video guy recorded the presenter only. The video guy asked me what to record and I told him the presenter(s) but in hindsight I should have told him to record the presenter and one of the screens that had our slides when applicable. This was dumb because for the recordings we had to upload the slides which made it a bit more difficult for people watching replays to follow along.

How much did it cost to host an event in Las Vegas for ~70 people and what’s my overall assessment?

Not sure if I can disclose the exact price but it was thousands of dollars. Room rental, two hotel employees to run the equipment and refreshments.

We could have done the event for less money if we recorded ourselves but because we had people that couldn’t make it to the live event I wanted to make sure everything went smoothly.

Overall I really enjoyed the process. I’m used to doing podcasts and other forms of public speaking, but standing up behind a podium isn’t something I do all that often so it was a lot of fun. I think I’ll do it some more…

I’ve already got ideas to make our next event even better and I’m looking forward to it.

We did our event the day before the main ASM event began so immediately following our event were three more days of epic learning and fun. I really enjoyed going to lunches and dinners with people in our mastermind and talking about their businesses.

(Read my post from the last event for more details on how the ASM live event is like).

Bonus: I also got to (briefly) meet Richard Branson. 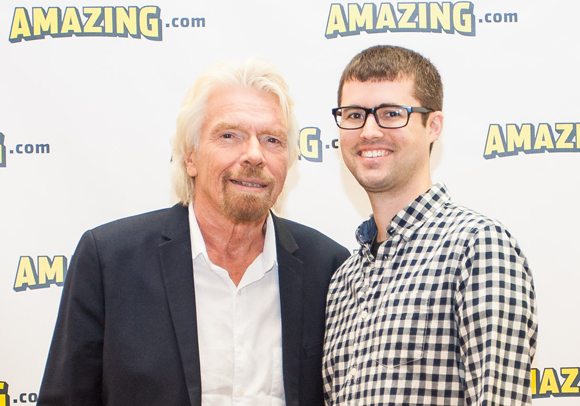 Note: Our Amazon ecommerce coaching group will be opening again on April 22nd if you want to join the wait list here.

[yellowbox]BONUS: Click here to access your free video training on how to create a 6 figure plus Amazon FBA business in your spare time.
This step by step guide is the exact formula I’ve used to create my Amazon business[/yellowbox]
Â« Previous EntryNext Entry Â»