Update: March 12th, 2015 – Dan Peña doesn’t look like he’d sell his castle to anyone and certainly not me

I had Guthrie Castle owner Dan Peña scheduled to come onto my podcast for an interview in February 2015 but it didn’t work out.

I really believe it was a misunderstanding, but I think his team got the sense I just wanted to have him onto my podcast to ask a bunch of questions about the Guthrie castle. I actually prepared more for our planned interview than any other and wanted to focus on his business successes.

In any case, flash forward to March 2015 and it turns out my friend Justin from Empire Flippers had Dan on his podcast. Justin and I have known each other a long time and so he probably read this blog post before. Well Justin asked Dan what he thought of my goal to buy his castle from minute marker 44:34 to marker 46:00.

Spoiler alert: It wasn’t pretty and he burns me pretty good hah hah

Note: I don’t think Dan’s facts were straight with what he said on Justin’s podcast about my communications with his team but does it really matter? No.

If I even wanted to come close to earning castle money (let alone Guthrie Castle money – when Dan clearly would never want to sell) then I’ve gotta be dreaming bigger than I am currently right now.

Dan if you’re reading this post again, I appreciate the inspiration. You’re right. I gotta go bigger. Sorry if I pestered you about your castle (I don’t even have the money to pay for it now anyway – the idea was that I’d get there in 20 years). If you’d have me I’d love to pay to come to one of your QLA seminars. I know I could learn a lot from you.

I’ve discussed goals in the past but today I’m going to share my most ambitious goal of all. I have a LONG way to go to accomplish this goal, but in 20 years or less I want to buy the Guthrie Castle which is located in the village of Guthrie in Scotland – (Yes, we Guthrie’s have our own village and a castle boo yah!).

The ancient seat of Clan Guthrie, the castle was built in 1468 by Sir David Guthrie, Lord Treasurer and Armour Bearer to King James III. The historic keep, which was added to over the centuries, remained in the hands of the Guthrie family until it was sold to a property developer in the 1983, following the death of the last male chieftain, Colonel Ivan Guthrie of that Ilk.

The 55 room estate sits on 156 acres was purchased by American businessman Daniel S. Peña Sr back in 1984 where he lived in the castle for 19 years. He spent millions of dollars restoring the estate and opened it in 2003 to corporate events, birthday parties and group functions. It now has an 18 hole public golf course that he built as well. src

Why do I want to buy the Guthrie Castle?

My last name is Guthrie – what better reason?

I can’t seem to find any records about how much he paid for the castle; however, I do know that Daniel has written numerous books so perhaps he mentions it in one of those books. I’m still doing some more research to figure out how much the castle would cost me; however, I know that in 20 years the current owner will be 85 and that could be the perfect time to sell the castle and who better to than a Guthrie? Needless to say I need to earn a significant amount of money to purchase a castle in 20 years which means I really need to think much bigger than I currently am. The only way I can earn the millions of dollars I’d need to buy the castle is to focus on building businesses that truly scale. The current business model I’ve been using can earn me a nice solid income to live on, but not enough to buy a castle. In either case, I have plenty of time to accomplish this goal and truly believe it’s possible.

My first mini goal is to make my first $1MM which I will do before I’m 30. Then sometime after I’ve earned enough money to even come close to buying Guthrie Castle (many millions of dollars more), I will try and meet Daniel Peña to discuss my intention to buy his castle. My ultimate goal would be to keep it within the Guthrie family, but an alternative (although still attractive option) would be to pool money with other wealthy Guthrie’s to buy the property together. I don’t even want to guess at how many millions it would cost because I know he spent millions renovating it, I do know the Nicholas Cage sold one of his castles for only £3.5 million.

How cool would it to be to own a castle? Let alone one that your family from hundreds of years ago used to own? Yes – no need to answer because I already know – it would be awesome.

Think I’m ridiculous? I probably am, but let me know what you think in the comments below ðŸ˜€

All this castle talk make you want to buy a castle too? Check out prices here.

More Photos Of The Castle: 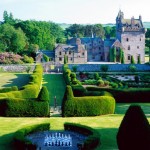 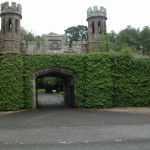